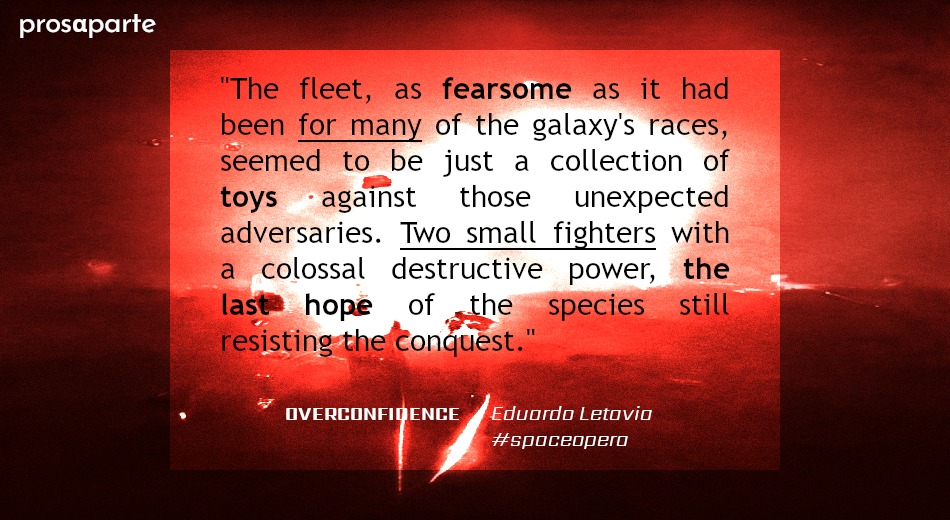 Another flash, another capital ship down. A cloud of debris and a light –like a small nova– was all that was left from it, mute bystander of a battle as hard as unbelievable. The Great Navigator, fleet's commander in chief, watched, in the strategy holo, the accurate wake of destruction that was coming, relentlessly, towards his ship.


Those damned pilots knew very well how to fight. The fleet, as fearsome as it had been for many of the galaxy's races, seemed to be just a collection of toys against those unexpected adversaries. Two small fighters with a colossal destructive power, the last hope of the species still resisting the conquest. Two miniatures, which brutally made their way through the giants of that matchless armada.


But they hadn't won yet. Not by far. The flagship would show them what is military might. It's captain, the Great Navigator, ordered the deployment of all forces on board, the maximum load of their shields, activate all the weaponry. He would give them a warm welcome... And a glorious and blazing ending!


A rain of beams and projectiles greeted the enemy fighters. A devastating wall of bright lights that, despite its frightening power, didn't managed to destroy them. The pilots were extremely good, or maybe despair made them run off from death. They moved in onto the flagship, infiltrating through the space titan's hellish defensive net.


A feeling of disbelief, of being living a nightmare, flooded the great leader's mind. Only then he noticed the mistake: the pride and the illusion of invulnerability had blinded his fabulous armada. It would be the last thing he could ever think of, before those rebel fighters shot their awesome special weapons. Like stellar swords, they chopped the huge enemy ship into pieces.


Another flash, another capital ship down. It's gigantic ruins stayed floating silently, unconcerned about the combat which it's looks were changing because of their presence.

This short story was a small experiment I wrote getting my inspiration from the shoot'em up kind of videogames (or matamarcianos —literally, martiankillers— as they were known in Spain years ago). The core idea was the following question: How the leader of a great stellar fleet, conqueror of worlds and with no equal in the galaxy, feels like when seeing their force shredded by just a couple of fighters?

It’s true that, in modern shoot'em up, the heroic ships the players handle have spectacular capabilities, able to destroy with a single shot targets several times their size. Knowing this yet, which experienced military leader or powerful army would expect being crushed by such a small force?