Returned with the rain 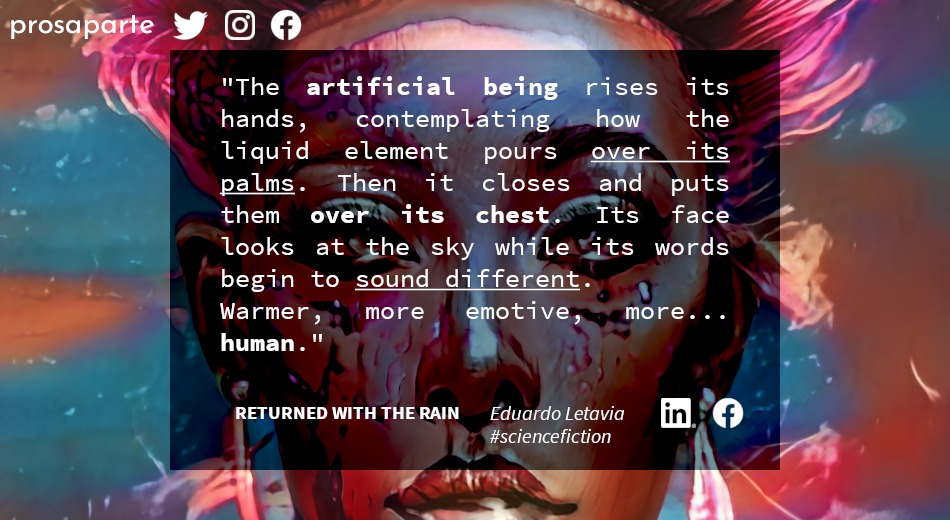 Their eyes manage to meet through the downpour's noisy confusion.


"Do you finally understand it?" asks the woman, raising her voice over the heavy shower.


The gynoid doesn't even blink, undaunted by the drops drenching it. After a few seconds, it answers with perfectly modulated words.


"The shape doesn't matter. Nor the fact of being organic or not."


The woman listens attentive, hopeful. Her breath is abated, because she feels that the moment is close. Very close. The artificial being rises its hands, contemplating how the liquid element pours over its palms. Then it closes and puts them over its chest. Its face looks at the sky while its words begin to sound different.


"It's to have your own will, to experiment, to share, to be in contact with others. Is... the voyage", she lowers her face and smiles, "and I've traveled a lot."


Those gestures, very far from the coldness she showed in the past, overwhelm the woman. The words, the emotions gathering in her voice... She gets closer to the artificial female and caresses the cheek where wet synthetic locks of hair are getting sticked.


She's not imagining that moment, it's truly happening, but she must make sure.


"Don't you have doubts anymore?" she asks her, still feeling the smooth manufactured skin.


She hugs the human, and she does it with the affection she was unable before. She speaks to her ear.


"I spent them all in paying my return ticket to here."


The woman's tears mix with the translucent pearls from the sky. She's irremediably happy. Her creation, her daughter, has made it. She strongly returns the hug back and then looks again for that face which has become truly alive. Those eyes are not inexpressive anymore, she can feel the person behind them. For a minute they stare intensely at each other and, finally, the woman finds the words to fill that moment.


"Welcome to the human race, my daughter."

I surprise myself again by discovering that I wrote, back in 2013, another short story in present tense. It's a text in which I speculate with the reunion, after a supposedly long period of time, between a gynoid (female android or robot) and its creator.

I didn't want to make the narration technical but moving. My goal was to express, in a few lines, the result of that woman-shaped robot's personal evolution, as well as the reaction of who created her when facing her again. We don't know anything about her trip, but the understanding she reaches about what is life sets her apart from the more common tyrannical or murderous artificial intelligences found in many science fiction works.