May your name be accursed 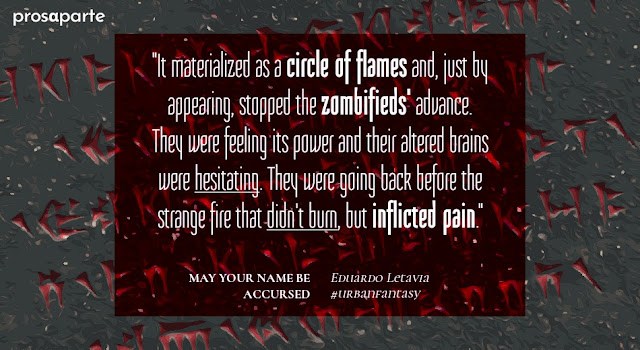 He went into the hall. Brand-new, neat, and with the typical security of an office building. Ah! Not so usual. He felt the magical control over the agents, which could zombify them in minutes.


Right when they saw him, they began to transform. He went through the access control and ran on the stairs, managing to go up several floors till running into some completely changed ones. The itching poison in his semi-auto's bullets left them howling on the ground. Pain was the fastest way to break the spell.


He could avoid them no more. What one saw, was seen by all. But he would take advantage of their hive mind. While letting them get closer to him, he made a summoning.


It materialized as a circle of flames and, just by appearing, stopped the zombifieds' advance. They were feeling its power and their altered brains were hesitating. They were going back before the strange fire that didn't burn, but inflicted pain. The spirit surrounded its summoner like a white hot wall. In seconds it expanded, sweeping the zombies around whose beastly screams turned into human shrieks. Shielded in such manner, the sorcerer resumed his way.


There were yet several floors left and he was still running into zombies on the way. He had dismissed the entity, its magic was exhauting. Surprised, he noticed that the lights... Were blinking! The ritual was progressing. He wouldn't make it by running! He should risk it with an elevator.


He called one and started the strangest spell he knew, the machinery possession. With the full control of the lift, he would avoid being trapped. Meanwhile, he heard zombie roars getting closer.


He made it in time to defend himself. Kicking and shooting, he got into the cabin. He pressed the last button, without stopping from aiming his weapon. When the elevator started to go up he leaned against the wall, tired.


It was incredible, he had arrived with no more setbacks. Carefully, he scanned the surroundings. He wasn't sensing anything, except for a tremendous energy in the floor above. It couldn't be so easy now.


“Come on, you just have clumsy little slaves? Such a letdown.”


All of a sudden, he felt them. Resurrected dead! Abruptly, ghastly hands blew out the columns that confined them, flying off a myriad of rubble pieces. But they stayed near the superior level's door. They weren't stupid, it was him who wanted to go through.


He observed them for a moment. Their parched meat was covered by protections, and they were holding some sort of katanas. Blowing their heads off wouldn't cut it, only shattering the heart would kill them. He saw around him, looking for something useful. Aha! A fire hose! He went for it slowly, the zombies were watching his steps. When he broke the glass and pointed the hose at them, they hurtled towards him. He opened the valve and, while aiming the jet towards the closest revived one, turned the water into an ice ram, hurling it through a window.


The second one avoided the stream and leaped on him, forcing him to drop the hose and the gun. Clutching his military knife, he nearly didn't deflect the first blow but blocked the second. A tremendous punch from the zombie made him stumble, but he could draw his revolver that way. The first shot, at the knee, and the monster lost his balance. Another one blew the leg off by its roots, and the shaman rushed at it.


They wrestled! Rolled around! It was a mess of limbs and dancing edges. Finally, and after getting good cuts, he could disarm it and tear off its breastplate. Three point blank shots to the heart later he got up, hurting in too many places. Only some solid doors, protected by magic, were blocking his path.


With his blood, he drew a pentagram over them. That magical figure multiplied the effect of his kick, shattering the wood. The splinters flew towards the interior, and he went up tired on the staircase that took to the invocation room.


It was huge, without columns or partition walls, a considerable space framed by really large windows. Behind an altar, the sorceress was piercing him with her gaze. Gorgeous, radiant, elegant, and with a strange headdress, she was quite the vision.


"You're late, you lowly wizard." The woman smiled at him scornfully. "The ritual ended a while ago, and the Master is very close..."


The witch looked up to the ceiling, towards a weird misty condensation. It was casting a ray of light over an hypnotized young man. Shit, he had left his 9mm behind. And he had just one bullet left in the revolver, with no time to reload. What was more, a magical wall was shielding the boy.


“Will it protect against falls?”


With a machiavellian smile, he extended his left hand upwards, as if it were a claw. He mumbled his spell and made as if he was pulling downwards. Creaking, the floor under the boy sunken noisily, collapsing onto the lower lever.


"¡No! ¡NO!" The witch turned pale and lifted a weak young woman from the floor. She shook her desperately. "Call them again! Have them stop him!"


Meanwhile, the beam was searching wildly for another target.


"My lady... No..." She had a disciple! That way she had been able to control the zombies and performing the ritual simultaneously! The apprentice fell on her knees, exhausted, just when the light was focusing on where she was.


Multicoloured rays surrounded the young woman and a tremendous blast hurled both sorcerers on their backs, shattering the great room's glasses. Bokor, the being with an accursed name, had possessed the girl. His supernatural voice filled the place.


"SHAMAN! You've lost your chance!" He looked at the witch. "I bid farewell to your servitude, pitiful creature. Did you really believe that I was coming to enlighten humankind? You'll see how I subjugate it to my will... Thanks to YOU!"


In a flash, the possessed one dissapeared. The sorcerer got up and went to the witch. He found her face twisted by confusion. Bokor had broken his influence on her, she wasn't his zombie anymore.


"Don't worry, no one has died." The shaman embraced her strongly. "You still can redeem yourself."


"No excuses! Your penance will be helping me to hunt that bastard." He took her on his arms and got out of there fast. The disaster was up to the police... He would have enough with preventing the war Bokor wanted to unleash.

Back in 2011 I decided to take part in a zombie-themed short stories competition. In the text's preparation I got inspired by the first movie from the Die Hard series, which made me locate the action in a skyscraper although switching the criminals to zombies. Then, and now too, that a modern temple of the commerce and finance "arcane arts" became the place to perform a black magic ritual seemed to me quite adequate.

The second feature that sets this narration apart is that its zombies are not undead, not most of them at least, but people whose will is nullified and put at a sorcerer or shaman's disposal by black magic. I found using that more traditional zombie concept more interesting but, given the story's length limitations imposed by the contest, I couldn't benefit much from the idea.

The text feels newbie and, after revising it, I've been tempted to post here a rewritten version of it. Still, I've chosen to leave as it was when I sent it (except for some corrected mistakes), because any change at this stage would be pointless and unfair with my past self.