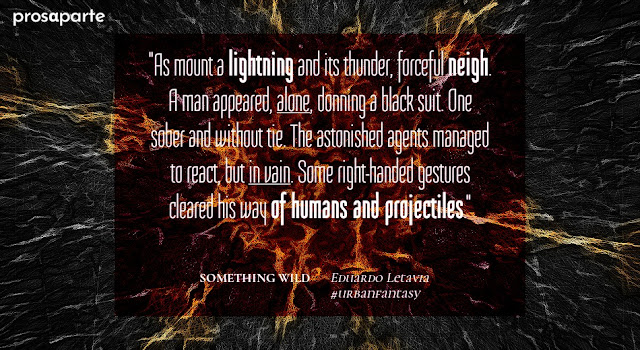 As mount a lightning and its thunder, forceful neigh. A man appeared, alone, donning a black suit. One sober and without tie. The astonished agents managed to react, but in vain. Some right-handed gestures cleared his way of humans and projectiles.


There it was, the building were that meeting was taking place and... Him. Standing up he, who had been one of his best apprentices, was waiting for him with a serious countenance.


"Don't interfere, master." he said. "Someone has to put limits."
"They pretend to legislate over forces of nature." he replied, quietly. "It's ridiculous, and you know it."


Insurmountable was the disagreement that divided them.


The air twisted violent around them, unpredictable sparks sprang ionizing the atmosphere. Barely they could be distinguished among the blinding gusts they were throwing at each other, but it was brief.


A blink and the man in black increased hundredfold the gravity upon his rival. Another movement and his opponent bited the pavement, charred by an energy beam. He came closer, without rushing, and talked to him.


"Magic is wild. Remember this always."


Then he turned to the hotel entrance, but the defeated still had strength to cry him out.


He went inside with a sly smile. Voltaic arcs were sparkling around his fingers.

I made this microstory in 2012 to participate in a contest from the defunct www.espadaybrujeria.com website. The restrictions were that the text should have between 150 and 200 words, that there should be one wizard at least as the leading role and, preferably, it should be developed within an urban environment. I don't remember where the inspiration came from, but I think I wrote the text simply from the idea of a suit dressed guy with rays bursting out of his hands.

This is one of my first texts that started to come out proper. It has strength, specially in its beginning, and it's well centered in the main plot (there wasn't any room for much more, of course). The defects I find in it now are about the form, but more in the spanish version of this fiction. Regardless, I still think this text is worth reading. Moreover, it hints a bigger story that maybe I'll develop one day.