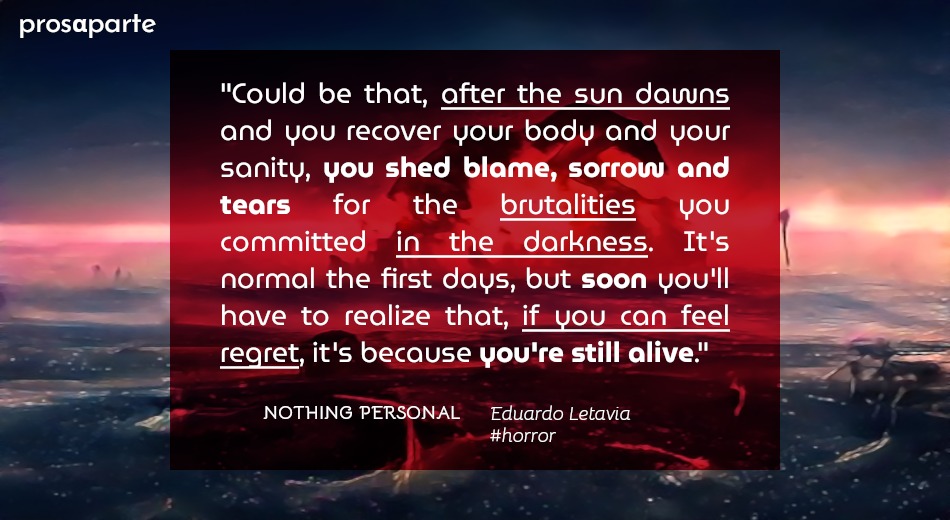 In this strange planet, the light of the hundred moons baths you with an uneven fortune. With luck, maybe only the clarity of the heavenly predator bodies will reach you and, on those nights, you'll always become a sharpened terror. That way you'll never be prey, but the devourer of the ill-fated ones you shred with your fury and your hunger.


Could be that, after the sun dawns and you recover your body and your sanity, you shed blame, sorrow and tears for the brutalities you committed in the darkness. It's normal the first days, but soon you'll have to realize that, if you can feel regret, it's because you're still alive.


Don't break, tame the beast. Don't allow yourself to fall into madness like those wretched ones who tried, so long ago, to settle here. Gaze at their remains, watch their ruins. Learn from their tragedy, and from my notes, and you'll be able to survive here.


And if you're asking yourself whether there's an exit from this damned place... Well, if you're reading this message is because I'm not there already, isn't it? Be patient, another ship will arrive one day and you'll must take the chance without hesitation. As I did... With yours maybe?


If it was like that, excuse me. It was nothing personal.

In the classic werewolf story, the light of our moon is able to transform a man into a lycanthrope. That made me think about what would happen in a planet that had more than one satellite, and that also the light of each one of them could turn anyone into any creature (and not necessarily into a powerful predator).

With that idea in mind, I wrote this short story in which I combine the science fiction of the interplanetary travels with the fantasy horror of the creatures of the night. In conclusion? Beware when you travel to planets with more than one moon, their light could turn you into anything.