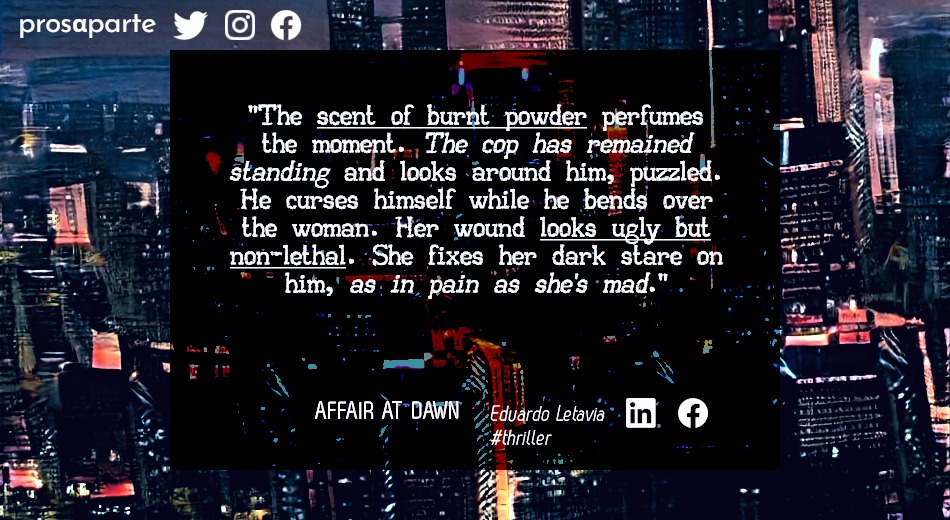 The headlamps' light stretches their sihouettes on the ground. The guns throw metallic glints toward their opponents, teasing them to end it once and for all. Just one of them doubts. The woman and the other guy, not at all.


The third man just grins the obvious remark, while keeping a close eye on the other two. It's clear she's coming for him, she has reasons, but the cop seems confused.


The woman steels her glare, she knows well who to aim. Not the inspector, who suddenly decides to turn his gun towards her.


Three blasts crack, cutting off the order, and two bodies abruptly fall over the old road.


The scent of burnt powder perfumes the moment. The cop has remained standing and looks around him, puzzled. He curses himself while he bends over the woman. Her wound looks ugly but non-lethal. She fixes her dark stare on him, as in pain as she's mad.


The policeman helps her to get up. She, grumbling rage and pain, gets closer and riddles with bullets the fallen man's corpse. Then she turns, slowly, throwing an angry look to the agent.

The core idea of this hard-boiled short story is the situation known as "mexican standoff": two or more sides are locked in a confrontation from which all of them can end losing something. The most famous example of this situation is the final duel in the western movie called "The good, the bad and the ugly" (1966). The uncertainty in the scene is kept till the end, and that was something I wanted to try to write in a fiction.

Moreover, for some reason I chose to write the narration in present tense, something that I don't recall having done again in later stories. After rereading this text, and incidentally editing some things, I have to admit that I found to write in present tense its particular charm: it puts the reader closer to the action and increases the intensity feeling the text gives off, although I'm sure these qualities will have their problems in other aspects.