Strangers at the gates 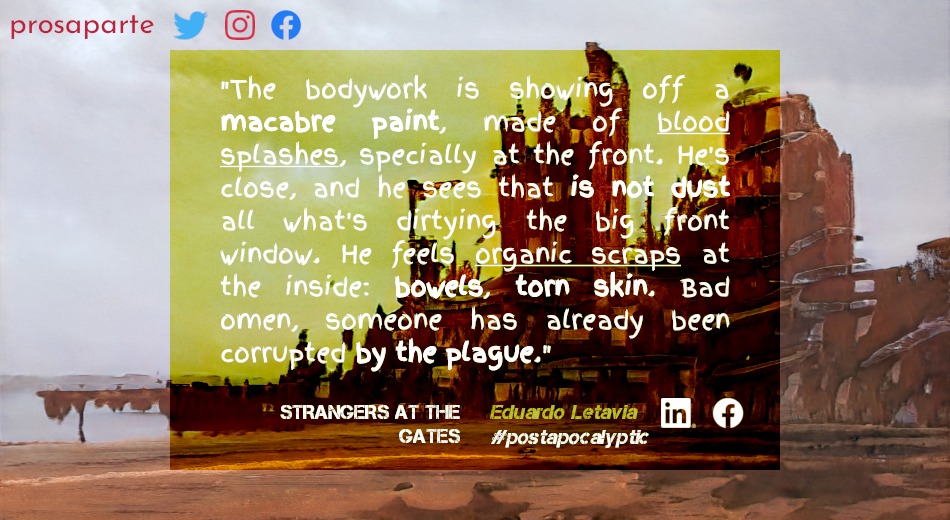 They demand him, there are strangers at the gates. He goes out by the old and thick camouflaged door at the wall. You can never be too careful against the mutants. From the wall, watchful eyes see how their most veteran guardian gets closer to the worn out buses. Suited up in tough leather clothing, and with a long machete hung at his back, the man reaches at a slow pace the first vehicle. He knows the deal, too many years of atrocious experiences have sharpened his instict.


The bodywork is showing off a macabre paint, made of blood splashes, specially at the front. He's close, and he sees that is not dust all what's dirtying the big front window. He feels organic scraps at the inside: bowels, torn skin. Bad omen, someone has already been corrupted by the plague. And that someone is at the bus's wheel, peaking his transformation among agonizing convulsions. He unsheathes his machete and, with a tremendous thrust, the citadel's guardian pierces the side window and goes through the ill-fated's head. One less problem. He stops and listens carefully: he hears bubbly whispers inside. Others are mutating, it's necessary a disinfection. He turns around and makes a warning signal for the sentinels at the wall. Then, he heads towards the other transport. He thinks, faithless, that maybe it'll be a lucky one. That someone remains who can be saved.


As he approaches, the vehicle's doors burst out and four barely humanoid beings appear. Covered in wounds, pustules and deformations, their disturbed minds only think on feeding. The guardian, right after seeing them, rushes headlong at them. Giving those abominations even a second is gambling with ending worst than dead. He manages to chop the head of two with a single slash, the blade he clutches is a bloodthirsty flash in his hand. The third goes after his neck, but he holds it back with his free arm, while he cuts the fourth creature's limbs. He hits it right in the heart, and then he strikes the remaining one before finishing it off.


He gets into the bus and, to his surprise, he finds a young woman at the wheel. He looks inside and finds nothing more than a still life of human remains, nothing menacing. He rushes back to the unexpected driver and checks her thoroughly. Damn it, she has deep marks of uneven teeth in the shoulder... He looks carefully. There's no infection!, just the beginning of an ugly scar. He smiles at her. He tells her that everything is fine, and the poor girl cries before fainting.


While others finish off the task will flamethrowers, he carries the girl in his arms, happy. After a long time, a new survivor will get into the citadel.

In the text, the world has been ravaged by a plague that turns humans, and other living beings, into brutal and mindless mutants. But the plague and its zombies are just an excuse: what I wanted whas to capture that moment of doubt which a survivors community must face when strangers reach their gates.

I remembered writing this short story, but not that I had redacted it in present tense. Besides that particularity, this narration is nothing more than a postapocalyptic tale that I wrote for a short stories contest.