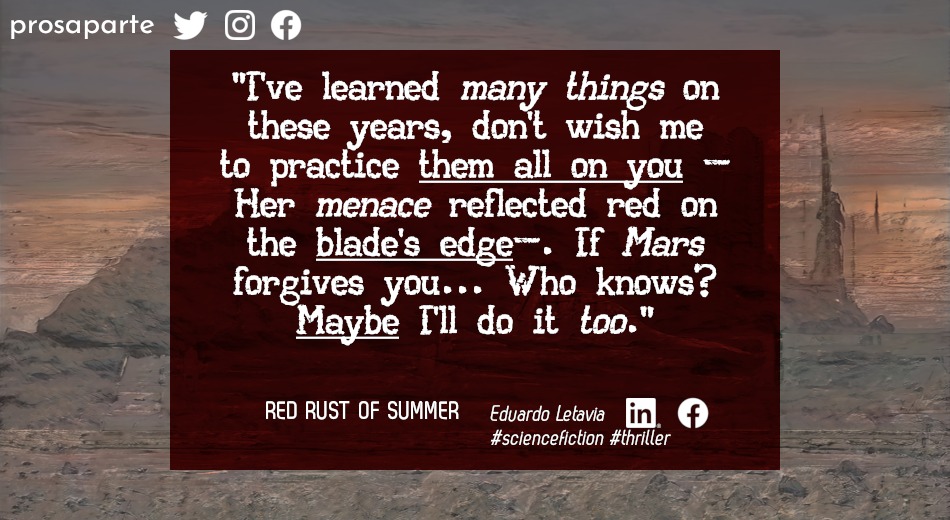 It was ugly, but not without charm. So much that Kate couldn't help going over to the bay window to gaze at the enormous regolith block outside. Polished and shaped like a keel against the faint wind of Mars, it endured stoic the martian dust's sharp abrasion, although the rust had already infected it with the planet's reddish hue. And soon it would have to bear again the weak temper of that desolated star. Summer had already arrived to the south hemisphere, bringing it's usual huge dust storm with it.


The lives Kate cut off then were her secret blame, but she didn't repent for it. Or, rather, she had made the effort of not repenting of what she did. She had to choose between that or the absolute ruin for the Ceranis colony, and time had sided with her. Kate paid for it by renouncing her previous life. So her old name, her old self, ended engraved on the monolith next to the ones she killed that terrible day. A reasonable price, she thought, in exchange for the achievements the colony earned through the following years.


Just one doubt had kept her uneasy in all those years. What happened to that darkhaired woman? They never found her body, only the wrecked remains of her survival suit. Maybe Mars ended the job that day, burying her under its harsh and dusty skin. Or maybe...


Kate barely noticed the woman with the jet short hair who, discreetly, placed herself on her side. She didn't pay her attention, many settlers enjoyed watching the chestnut horizon through the vast bay window. But the stranger wanted to share that moment of contemplation with her.


—The view is great, but that monolith spoils it.


Kate looked surprised at the woman, was she talking to her? Not seeing anyone else close around there pointed her out that yes, she had to answer her.


—The truth is that it didn't convinced me at first —said Kate, smiling to the unknown woman. Nevertheless, while glancing at her she felt something familiar in her, why?—, but I don't think it's that ugly anymore.
—I'm not annoyed by its looks —objected the woman with unexpected harshness—, but its inscription. Your name shouldn't be carved there, Faith.


Kate's heart missed a beat, maybe two. What had that woman just called her? Her frightened mind looked for an explanation, and she found it fast.


Kate tried to step back, to get far from that spectre from the past. But the woman was much faster.


—No, no —denied Julia in a musical tone, grasping Faith by the wrist—. You can't go. You must see how I blow up your lie!


With her free hand, she fished some sort of remote out of a pocket and pressed a giant button. Faith didn't need explanations, it was a detonator. One like the other herself used years before.


The explosion lit up Julia's furious smile, quite the grimace of vengeance. The floor trembled and the regolith, shattered into pieces, strafed the window's glass.


Faith, stunned, was unable to break free from that mad woman. At the same time, confusion raised to the top in the place, and worst was the terror. She couldn't help being carried away by her captor towards a near maintenance access. There Julia forced her to put a survival suit on. One aged and badly patched which confounded her when she recognized it from the original settlement.


—Yes, Faith. You'll go for a walk with the suit that saved my life that damned day. Come on!


She found hard to walk in it. The suit was made for someone bigger than Julia even. But she didn't had time to think about it. Julia forced her, at gunpoint, to go further from the explosion's location, and also from any chance of rescue. Julia had planned her move well.


—And now what! —blurted the woman with two identities out—. Are you going to execute me? It's too late! I've won! Ceranis is something that you wackos wouldn't have imagined to achieve ever!
—And blowing us up was the best way to convince us, eh? Just because your ambition was better than our dream?
—Your dream was impossible! And I didn't want to lose everything for one damned utopia!


The radios transmitted their faltering breathing, a slight pause for their confronted wills. Julia denied in silence, but her gaze was still resolute. She got close to Faith and turned her around, making her face the horizon. An enormous and orange cloud was growing nearer.


—You see it? 'twas also summer back then, and the storm came —the woman's tone was hard, accusatory—. Just like that one. Perfect to hide your massacre, and to cover my flight from it... But it wasn't funny. Oh no, Faith. I walked kilometres inside that dust that blinded me and wore down my suit. With no more water than the recycled, and to eat only the urge. But I survived, and I sweared revenge, Faith!


Julia shoved Faith wildly, making her stumbling over. She would have bitten the dust if she hadn't worn a helmet. Faith sat up awkwardly to face again the woman who was sending her to her death.


—Kill me already, Julia! Or you don't want to get stained with my blood!


Julia didn't reply, she just took a huge knife out from a sheat at her back and showed it to her.


—I've learned many things on these years, don't wish me to practice them all on you —Her menace reflected red on the blade's edge—. If Mars forgives you... Who knows? Maybe I'll do it too.


Faith looked at the woman, then at the dust cloud hovering over them. Translucent and frayed, the huge dust storm veiled the distance's boundaries. Faith had two options: one sure was deadly, but the other... She stood up and started to walk, without looking back.


Julia simply remained there, seated on a rocky protrusion, watching how Faith slowly dissipated in that wind loaded with the red rust of summer.

Camouflaged under a scifi setting, this fiction offers a story more typical of the noir genre, although located many millions of kilometers away from its more usual scenarios.

In the noir genre, rain is the weather phenomena par excellence, but water doesn't fall from the sky on the red planet. Nevertheless, the martian summer raises gigantic dust storms, something I found very useful to add some extra dramatism to this short tale.