Rites of lead, prayer from the sea 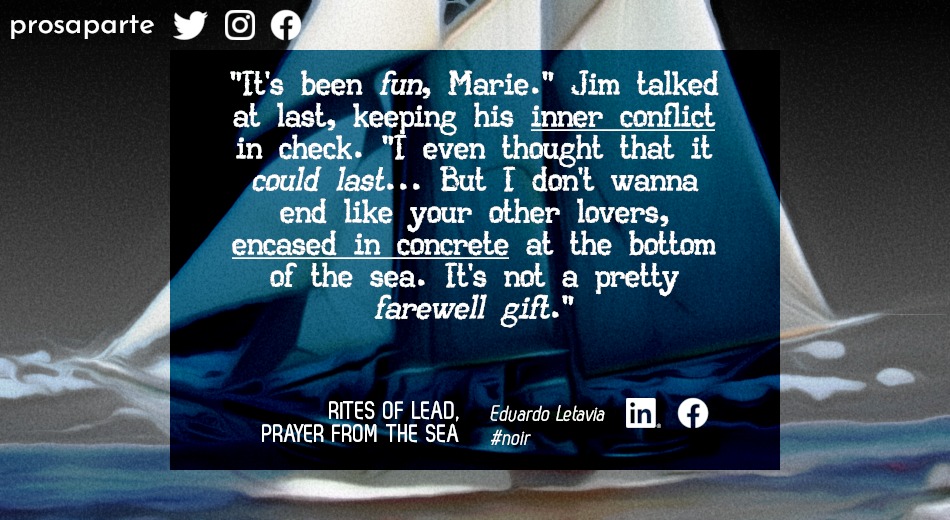 The taste of sex rose towards the night sky with each puff. The smoke curved itself recalling the passion the smoker was trying to leave behind. Yeah, the fuck had been mighty, brutal as swimming in lava. But that didn't matter anymore. There were thousands of bucks in rum under his feet, and he was going to steal it all from her owner over her dead body.


A barefooted unexpected whisper grazed the deck. It was Marie who was getting closer to his back. He felt strange thinking that, luckily, she hadn't caught him sending the signal to the others.


He turned and gave her a half smile. Damn it, he was feeling even worse when that beauty was near.


"To tell the truth no. Maybe it's at the bottom of the sea." he replied, throwing the dying cigar overboard.
"What a pity." she appreciated softly, trapping him with her warm embrace and intense indigo eyes. "Sure you haven't look for it right. Or maybe you left it among the sheets..."


Marie slipped the words naughtily, etching one more kiss in the neck scratched by the lust past. But for him that alluring sweetness was uneasy now, impossible to stand.


"Get off me Marie." blurted her out while harshly freeing himself from her slender arms. "Farce's over."
"Farce? What do you mean?"


The woman's surprise became bewilderment when she noticed a metallic glint in the man's hand. It was aiming at her.


Her voice seemed about to break and a fist, pale from the pressure of fear, clenched over her chest. She moved away from her lover as if she wouldn't recognize him, with unsure steps, while her other hand looked for something to hang onto. The penumbra had suddenly turned out to be very sinister for the lady.


It made him sad to see her that way, fragile and scared. That wasn't the hotheaded Spanish Marie who had known and loved. That wasn't the woman who sailed with no fear carrying rum from Havana to Florida slipping past the coast guards. Before seeing her crumbling completely, he decided to end that pathetic vision as soon as possible.


"It's been fun, Marie." Jim talked at last, keeping his inner conflict in check. "I even thought that it could last... But I don't wanna end like your other lovers, encased in concrete at the bottom of the sea. It's not a pretty farewell gift."
"Jim, wait! You don't understand!" she screamed in a desperate tone.
"Goodbye Marie."


Three shots resounded under the moonless night, shuddering the air with their echo. Even the sea seemed to stand still after the blasts. But a fourth shot cracked. And a fifth, and so on until Jim emptied the clip. The lady's hazy outline didn't turn a hair, and no bloodstain tarnished her long white gown.


"What the hell?" he cried astonished.


The shock transfigured the man's confidence. She got rid of the mask of fear from her face and straightened her figure. A near lantern's light shattered into shadows over the, now severe, woman's features.


"Jim! I only dispatch the morons who betray me!"


The words cut the air between them. He raised his sight and crashed with a gaze which burned his guts. That was the blue fire of Spanish Marie, intense and clever. Merciless. And he had failed in putting it out.


"Not this time." Jim replied without much aplomb, listening to the noises coming from that atlantic and indifferent sea.


His mind relaxed when he soon heard a soft splash of paddles. At least that part of the plan had carried on. Men armed with guns came up to the deck and, silent as graves, surrounded the couple. The lazy light didn't allow Jim to tell well their faces apart, but he felt the newcomers' attitude strange. They were neither nervous, nor they looked anxious to grab the liquid treasure in the hold. They seemed more like expecting an order.


Jim's blood froze in that very instant, while Marie felt her temper reaching boiling point in her veins. She raised her hand to sign the man to wait.


"Surprised, Jimmy?" the woman's sarcasm sounded sharp. "You thought you were smarter than me, and look at yourself now. Oh wait! I do have another surprise for you... Rolland!"


Another man came out from the yatch cabin and gave her a pistol. It was the same as the Colt 1903 Jim was still grasping in vain. The cornered's spirit sunk deeper and she read in his elusive eyes the horror to a unexpected and too close death.


"You see it? This is your gun, darling."
"A little big for you, isn't it?" he said, awkward.
"Underestimating me again? How little you know me, Jim." Marie replied, colder than the semiautomatic she was gripping. "You wouldn't like to know how many hearts I've shattered with their own lead."


A bossy gesture from Marie made the hefty Rolland to hand her a cigarette from his case and lit it right away. She gave it a long draw, without stopping from nailing her steeled iris in the man she was going to execute.


"Hold him." she ordered finally.


Jim didn't resisted. Diving into the water was as suicidal as fighting all those guns. Maybe worst. She went close, stuck the cig in his mouth and a warm kiss on the cheek.


She distanced from him a few steps and the men moved out of the way when they saw her aiming with killing resolve. Jim just savored that last cigar and smiled bitterly.


"What! There won't be no concrete coffin for me?"
"No, darling. I already wasted enough in your blanks."


Three detonations briefly lightened the darkness up, after that the funeral began.


It was brief, something ordinary among sharks.

Through the years in which The Prohibition was enforced in the United States, the streets of cities like Chicago or New York remained, ironically, soaked in alcohol and blood. But that war for money and power was being done also at sea, in boats or ships ready to carry the valuable cargo swift and discreetly.

Rum and other liquors were brought from Havana to the Florida coast avoiding, bribing or shooting the coast guards. This wasn't an exclusive game for men, there were also women who went far on both sides of the law. And it's one of them, Marie Waite, who inspired me to write the short story published in this post. If you want to know a little more of the woman she was in reality, check out this article.